The Mongadors were a French juggling troupe founded in 1900 by Georges Chambeyron. The troupe varied in size from five to two members and lasted until the early 1970s. The final version consisted of Georges’ wife Anne and their daughter Ninette. 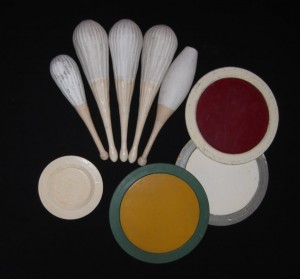 The props shown above include three large and one small bulb clubs that are made of wicker covered by plaster of Paris, a Van Wyck club, three wooden discs, and a wooden plate. Purchased from Charlie Holland.

This is one of Ninette Mongador’s torches. Purchased from Vicky Woodgate. 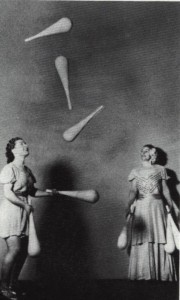