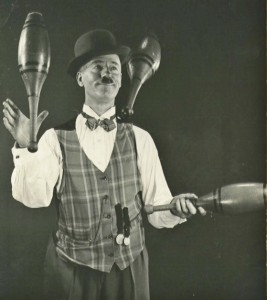 Stan Kavanagh was born Arthur Stanislaus Joseph Kavanagh in Wangaratta, Victoria, Australia  in 1889. He began performing professionally around 1907 and was an international star by the early 1930s. He was best known for his comedy juggling with balls and clubs. He eventually became a citizen of the United States. He passed away in 1957.

This is one of Stan Kavanagh’s performance clubs, which can also be seen in the photo at the top of the page. It’s a very rare Van Wyck club. Acquired as part of the Paul Bachman Collection.