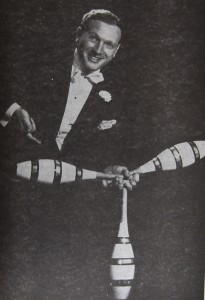 Larry Weeks was born Lester Fulton Weeks on September 24th, 1919 in Salem, Massachusetts (USA). He learned to juggle at the age of ten. As a young adult, he performed in New York, Boston and Montreal night spots with an act called “Juggling For Fun.” He earned the nickname “Speedsational” for his rapidly-paced act. During World War II, Larry was drafted into the U.S. Army, where Irving Berlin saw his juggling act. Berlin got Weeks transferred to the company performing Berlin’s show, “This Is The Army.” Larry’s juggling routine was called “Kitchen Police,” which was an Army term for potato peelers, dish washers, and other kitchen workers. In the act, Corporal Weeks juggled potatoes instead of peeling them and also juggling knives and forks. He did some flag twirling and performed a rifle drill with a mop in the show as well. Larry was the President of the IJA in 1966. “This Is The Army” toured military bases all over the world and even played on Broadway, performing a total of 1,200 shows for 2,300,000 audience members.  In 1943, it was made into a film which featured Larry doing a very brief portion of his act. Larry was best known as a magic and juggling collector. He passed away on October 13th, 2014.

This is a club that Larry made and performed with. Acquired as part of the Paul Bachman Collection.