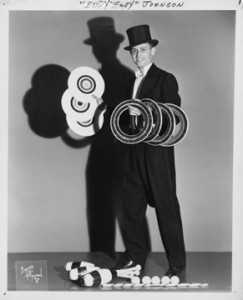 Edwin G. “Eddy” Johnson (1922-1999), one of the eight founders of the International Jugglers’ Association in 1947, worked professionally and semi-professionally through the years, both as a solo performer (“Eddy Easy”) and in an act with his wife, Eleanor Johnson (“Eddy & Ellie”). He was involved with the IJA throughout his life, serving as an officer in the 1950s and organizing the 1952 convention in Altoona, Pa. (He was designated an Honorary Life Member of the IJA in 1995.) A graduate of the Wharton School of the University of Pennsylvania, he pursued a career with the federal government, ran a travel agency in his retirement, and served 16 years in the Pennsylvania state legislature.

This is one of Eddy Johnson’s Harry Lind clubs. On loan from the IJA Archives.