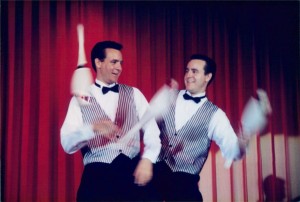 Doubble Troubble is the juggling team of identical twins Alex and Nick Karvounis. They began juggling at the age of 12 in 1983. They were the IJA Teams Champions in 1991 and have won many IJA Numbers Championship gold medals. They appeared on the Tonight Show and have appeared in various Las Vegas shows such as Splash at The Riviera Hotel, Extreme Scene at The Plaza Hotel, Fantasy at Luxor Hotel, and Jubilee! At Bally’s Hotel.