The collection began in June of 2012, when David Cain purchased a set of Van Wyck clubs. David had always wanted a set of Van Wycks due to their historical value as well as their connection to him geographically. Edward Van Wyck made his clubs in nearby Cincinnati, Ohio. After purchasing the clubs, David decided to pursue a long time dream of putting together a collection of historical juggling props that could be displayed as an exhibit at juggling festivals and conventions. With initial advice from Dick Franco and donations from Michael Chirrick, Tommy Curtin, and Anthony Gatto, the collection got off to a running start. David is extremely appreciative of everyone in the juggling community who has supported effort through donations, advice, referrals, and general support. Special thanks goes to Scott Seltzer for donating the hosting space for this website. Scott Cain acts as the assistant curator and researcher. He has also been extremely helpful in finding quite a number of props and photos. He has assisted in showing the exhibit many times and knows the details of the collection almost as well as David. 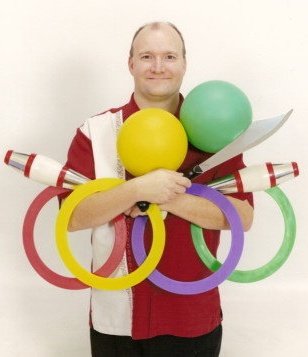 David Cain has been a professional juggler for 38 years. His performing career has included circuses, amusement parks, cruise ships, corporate work, comedy clubs, television, schools, and theaters. He now specializes in churches. David has won 16 gold medals in the International Jugglers Association’s Stage and Numbers Championships. He was also the first person to ever flash 8 sticks in performance. He is a Guinness World Record holder and currently has 20 world records. David is considered by many to be the most versatile juggler in the world. David and his twin brother Scott won the title of America’s Most Talented Twins on NBC’s Today Show in June of 2013. David is the author of thirteen books about juggling history and has written over 400 articles about juggling history for Juggle Magazine and eJuggle Magazine. He has also been honored with the IJA’s Bobby May Award and IJA Excellence in Education Award. David lives in Middletown, Ohio, USA.