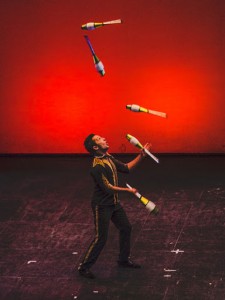 Luis Niño Villesca, better known as Toto, is a legend in the Latin American juggling world. Born in 1984, this Chilean performer learned to juggle at the age of 12. He is best known for his high level technical club juggling, including many creative tricks with 5 clubs and for being the first South American to juggle 7 clubs. He is not only technically gifted, but is a wonderful performer as well. He has won numerous awards at conventions and festivals around the world.

This is one of Toto’s performance clubs. Donated by Toto.