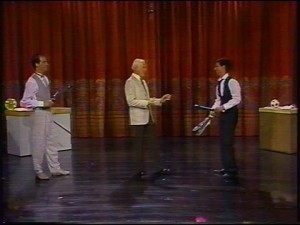 The Raspyni Brothers are the very successful comedy juggling duo of Dan Holzman and Barry Friedman. They began performing together in 1980 and have become one of the most successful comedy juggling acts of all time. They have performed for U.S. Presidents, opened for many well known comedians and music acts, and have appeared on television numerous times, including the Tonight Show twice. They are also the 1984 and 1988 IJA Teams Champions.

This is one of the knives used by the Raspyni Brothers to pass around Johnny Carson on the Tonight Show in 1986. You can see it being used in the video below. Made by Barry Friedman and signed and donated by Dan Holzman.

This is a Raspyni Brothers’ club acquired as part of the Paul Bachman Collection. 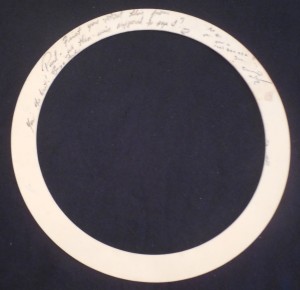 This is a leg hoop / ring used by the Raspyni Brothers. Acquired as part of the Paul Bachman Collection.