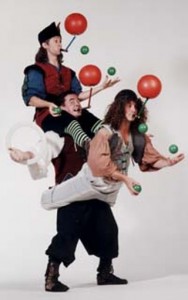 The Flaming Idiots consisted of Jon O’Connor, Rob Williams and Kevin Hunt. Their stage names were Pyro, Gyro, and Walter. They began their act as a busking routine in the early 1980s in Dallas, TX (USA) and they performed their last show at the New Victory Theater on Broadway in New York City in 2004.

This is a Flaming Idiots club, donated by Kevin Hunt.