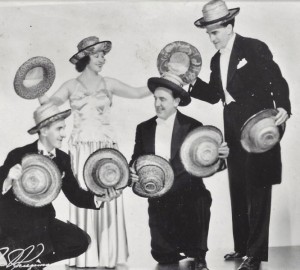 The Elgins were the best known American juggling troupe throughout the 1930s and 1940s. The Elgins originally consisted of Tommy Breen (of The Breens), Rose Sheldon (formerly of Fitzgerald’s Eight Juggling Girls, Paul Shultz’s Juggling Girls, The Tossing Tabors, The Throwing Tabors, and Baggett & Sheldon), Cal Kenyon (formerly of Kenyon Brothers and Allen, The Altus Brothers, and Mahoney & Auburn), and James Baggett (formerly of The Barretts, Frear, Baggett, & Frear, and Baggett & Sheldon). They were famed for their club passing and hat juggling act. 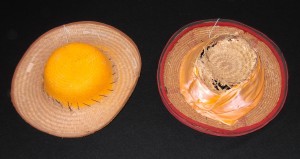 These are two of the Elgins’ juggling hats. Acquired as part of the Paul Bachman collection.

This is one of the Elgins’ juggling clubs. Acquired as part of the Paul Bachman collection.