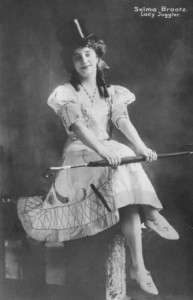 Selma Braatz (1885 – 1973) was a German juggler carrying on a great tradition of female jugglers in her family.  She was trained by her aunts, Welda Braatz and Clara Braatz, who were both successful jugglers. She also was trained by the great gentleman juggler, Salerno. Her career began in 1902 and took her to five continents. She quickly became the best known female juggler of her time. Her act included juggling three tennis balls while balancing a racket, a five ball routine, 6 balls, a routine with a top hat/gloves/umbrella, three color changing torches, two sticks and a woolen ball, and three pool cues. She balanced a billiard ball on a cue stick which she balanced on her forehead while juggling three balls. She would then drop the billiard ball off the cue stick and go into a four ball juggle while still maintaining the balance. She retired in 1937 and moved to the United States in the 1950s.

This is a color changing torch used by Selma Braatz during her career. Acquired as part of the Paul Bachman Collection. 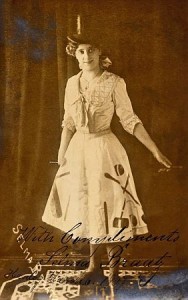