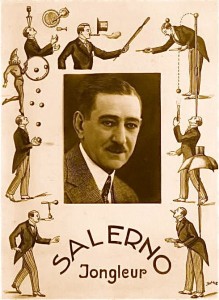 Salerno (1869-1946) was born Adolph Behrend in Germany. He was one of the originators of the Gentleman Juggling style and was one of its top two performers, along with Kara. He began his performing career in 1886. In 1912, he created electrically lit clubs that changed colors as he juggled them. He was also an inventor and one of the first airplane pilots in the world. 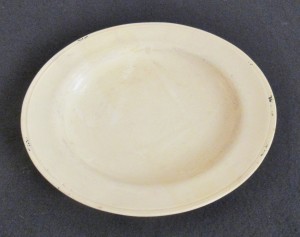 This is bakelite plate that was owned and used by Salerno and later owned by Bobby May. Acquired as part of the Paul Bachman Collection. 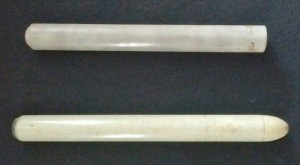 These are Salerno’s self lighting candles. The bottom one is complete, with an outer shell, inner shell, and an internal mechanism that includes an early flashlight battery, a mercury switch, and a glow tip igniter tip. It would light when flipped. It was invented and used by Salerno in his act. The upper candle is a duplicate, but lacks the internal mechanism. It was passed from Salerno to King Repp to Dieter Tasso. Donated by Dieter Tasso.

This is an amazing lighted club made and used by Salerno at least as early as 1905. It was later passed on to and used by the Juggling Jewels. Acquired as part of the Paul Bachman Collection.