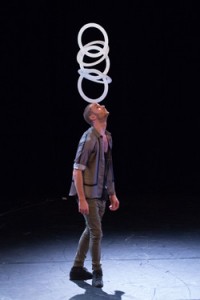 Patrik Elmnert was born in Sweden in 1989 and started performing at the age of ten. He is a very creative juggler best known for his ring and club juggling. He studied under Jay Gilligan at the University of Dance and Circus in Stockholm, Sweden. He often performs with Wes Peden.

This is one of Patrik Elmnert’s performance clubs. Donated by Erik Aberg.