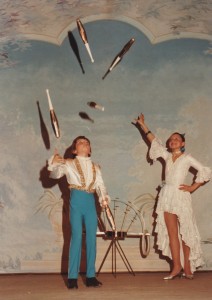 Laci Endresz, Jr. was born Laszlo Endresz in 1975 in Eastbourne (East Sussex), England, into an old circus family. His father is Hungarian and his mother is English. As a child and teenager, he was a well-known juggler. He now works as Mooky the Clown in his family’s circus, the Blackpool Tower Circus. Laci won a silver medal at the Festival Mondial du Cirque de Demain in 1995 with his juggling act. He has also been elected twice Best Clown in Great Britain by the British Circus Friends Association.