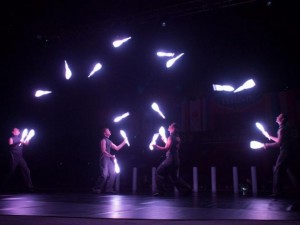 Jonglissimo is a very successful juggling team from Austria. Originally consisting of brothers Manuel and Christoph Mitasch, the have since been joined by Dominik Harant and Daniel Ledel. The Mitasch brothers won the IJA Teams Championships in 2005 and 2007 while Dominik and Daniel won the same competition in 2012. Members of Jonglissimo hold numerous passing world records, including 9 to 13 clubs between two jugglers, 18 clubs between three jugglers, and 12 to 17 rings between two jugglers. They are best known for their performances with programmable lighted clubs.