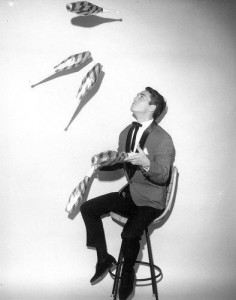 Fudi (Zsilak Gyorgy) is a Hungarian juggler born in 1942. He had a very long performing career as a solo juggler as well as performing with his wife Suzanne and daughter Viktoria. He won the International Juggler’s Association All Around Championship in 1969.

This is one of Fudi’s performance clubs. It has a wood handle and bamboo ribs covered with foil. It was made by Fudi’s father and patterned after the clubs used by the famous Bremlov family. Donated by Zsilak Gyorgy.