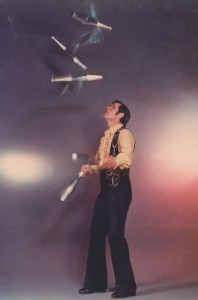 Ernö Schneller was born on March 17, 1936 as the 2nd son of Jenö Schneller and Olympia Picard in Csikeria, Hungary. He grew up with his siblings, two brothers and two sisters in his parents’ circus and already had various performances in the ring as a child. At the age of thirteen he decided to become a juggler. With his brothers Johann and Karoly he created an extremely attractive speed juggling – the 3 Schneller`s. In the early 1960s, Ernö left the trio and became a solo juggler. In 1973, he placed third in the Rastelli Juggling Competition in Bergamo, Italy. He eventually added unicycle and trained animal acts to his repertoire. He passed his skills down to his children as well. In 2004 Ernö Schneller died suddenly and unexpectedly during a guest performance in Krems – Lower Austria.

This is one of Ernö Schneller’s clubs. Donated by Eddy Carello. 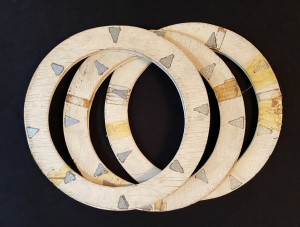 These are some of Ernö Schneller’s rings. Donated by Eddy Carello.