Eddy Carello Jr. (born Edouard Hunziker Jr. in 1970) is a Swiss juggler who has been performing from the age of 11. He originally performed toss juggling and combination tricks but now has a great act involving playing a drum set by juggling and bouncing balls off the drums as well as other tricks using musical instruments. He also performs an act with large balls using ball spinning and juggling. 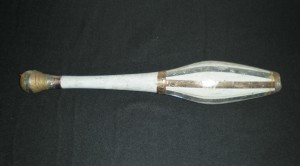 This is one of Eddy Carello’s childhood performance clubs. It is made by his father out of hardwood with a cork body. Donated by Eddy Carello Jr.. 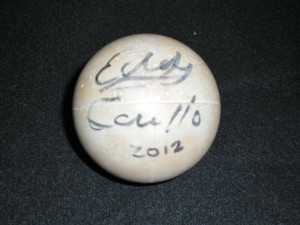 This is one of Eddy Carello’s recent performance balls used in his drum set ball bouncing act. Donated by Eddy Carello Jr..