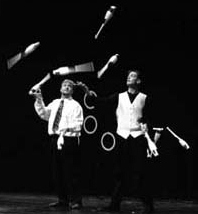 Crash and Burn were the 1994 IJA Teams Champions. The team consisted of American jugglers Jay Gilligan and David Cain, whom had each won solo gold medals the previous year in the IJA Stage Championships. They performed many original and innovative tricks and patterns, including 7 clubs back to back in a one count. They have each gone on to have successful performing careers.

This club was used by Crash and Burn in their gold medal winning performance in the 1994 IJA Teams Championships. The club was made by Todd Smith Products, established in Cleveland, Ohio, USA in 1981.