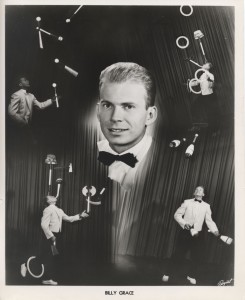 Bill Gnadt was born March 8, 1928, in Boise, Idaho. At age 12 Bill learned to juggle and began juggling items from his father’s hardware store. Before long he was juggling sickles and meat cleavers. As a teen he performed magic and juggling in local USO shows. Bill learned to juggle close to 200 different kinds of tools. He could juggle up to nine rings, six plates, and four plates in one hand and two knives in the other hand. Other props he worked with included M1 rifles, bowling balls, pitchforks, basketballs, machetes, samurai swords, pitchforks, double-edged axes, lopping shears, amputation saws, rings, sledgehammers, torches, hedge trimmers, baseball bats, shot puts, and chain saws. He loved to juggle the heavy and danger tools and was proud that doing so set him apart from other jugglers. The only time in his career when he juggled mostly typical props was during his “Billy Grace” days at the Showboat. Bobby May said Gnadt was the greatest technical juggler he ever saw and Anthony Gatto called him “very original.” Bill Gnadt passed away in 2010.

The following props were purchased by David Cain from Taylor Glenn. 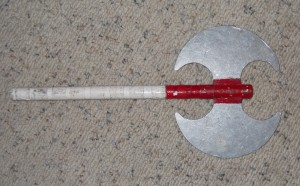 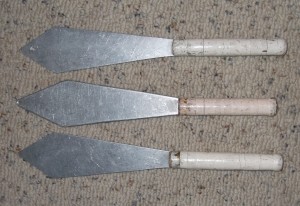 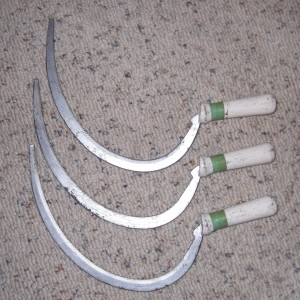 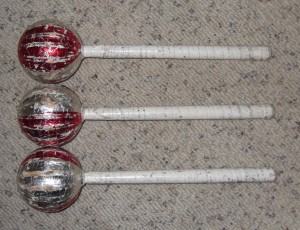 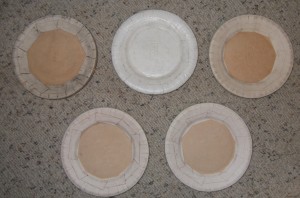 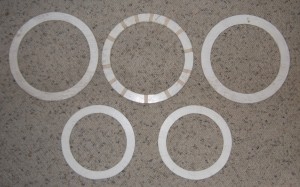 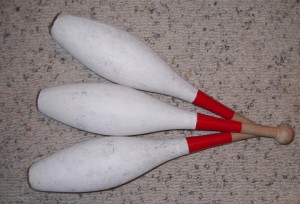 The above clubs are some of the nicest Harry Lind clubs known to exist, with the cork end caps still soft and intact.

The video below, from the 1969 IJA Convention,  shows Bill Gnadt at 2:18 juggling some of his tools and again at 2:47 juggling various arrangements of dangerous items.