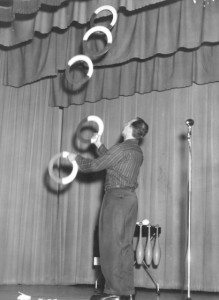 Bill Dietrich was born in 1930, was at the first several IJA Conventions, dating back to 1948, and is still attending juggling festivals as of 2015. Bill is known for his ring, club, plate and ball bounce juggling. Bill served as an officer in the early IJA and was made an Honorary Life Member back in 1979! Though Bill never was a full-time professional juggler, he did perform frequently and has been an inspiration to many jugglers over the years. Bill currently lives in Erie, PA was his wife. 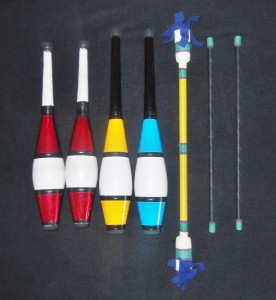 These are some of Bill Dietrch’s clubs and a flower stick. Donated by Bill Dietrich. 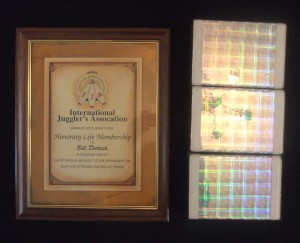 Click here to see Bill Dietrich doing ball bouncing juggling and five ring juggling at the age of 80 in 2010.