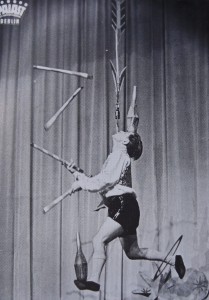 Bert Holt was a well known juggler from Freiburg, Germany. His actual last name was Bertholt, but he split it up to create his stage name. In the 1940s, Bert developed an act where he hung by his teeth on an “iron jaw” aerial apparatus and juggled while suspended up to 12 feet off the ground. He performed a variety of difficult feats, most famously juggling six rings while spinning two more on his ankles.

This is Bert Holt’s iron jaw apparatus. He would bite onto a piece of leather wrapped around the left-most metal loop. Donated by Chrys Holt. 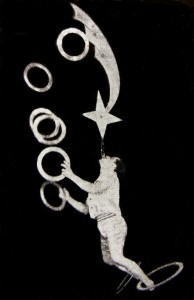