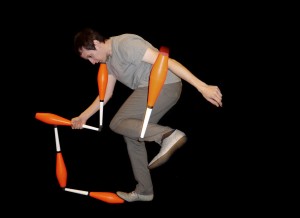 Jay Gilligan is a professional juggler and performer from Arcadia, Ohio currently performing and living in Europe. He is the 1993 IJA Juniors Champion, the 1994 IJA Teams Champion with David Cain, and the 1995 IJA Teams Champion with Fritz Grobe and Morty Hansen. He is one of the most creative and successful jugglers in the world. Jay is the main teacher of juggling and creator of the juggling program at the University of Dance and Circus in Stockholm, Sweden. 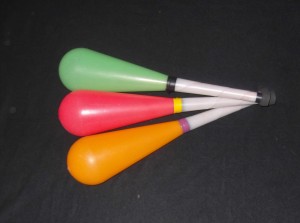 These are Jay Gilligan’s Renegade fathead clubs, which were the first fatheads ever made. Donated by Jay Gilligan.